Spectroscopy & Microscopy of Electrochemical Interfaces
The performance of electrochemical devices often hinges on the chemistry of a particular interface, and on how that chemistry varies spatially and under different operation conditions. To understand these phenomena we use infrared, Raman, and XPS spectroscopies in air-free environments. We also develop and apply operando and mapping capabilities for these spectroscopies. 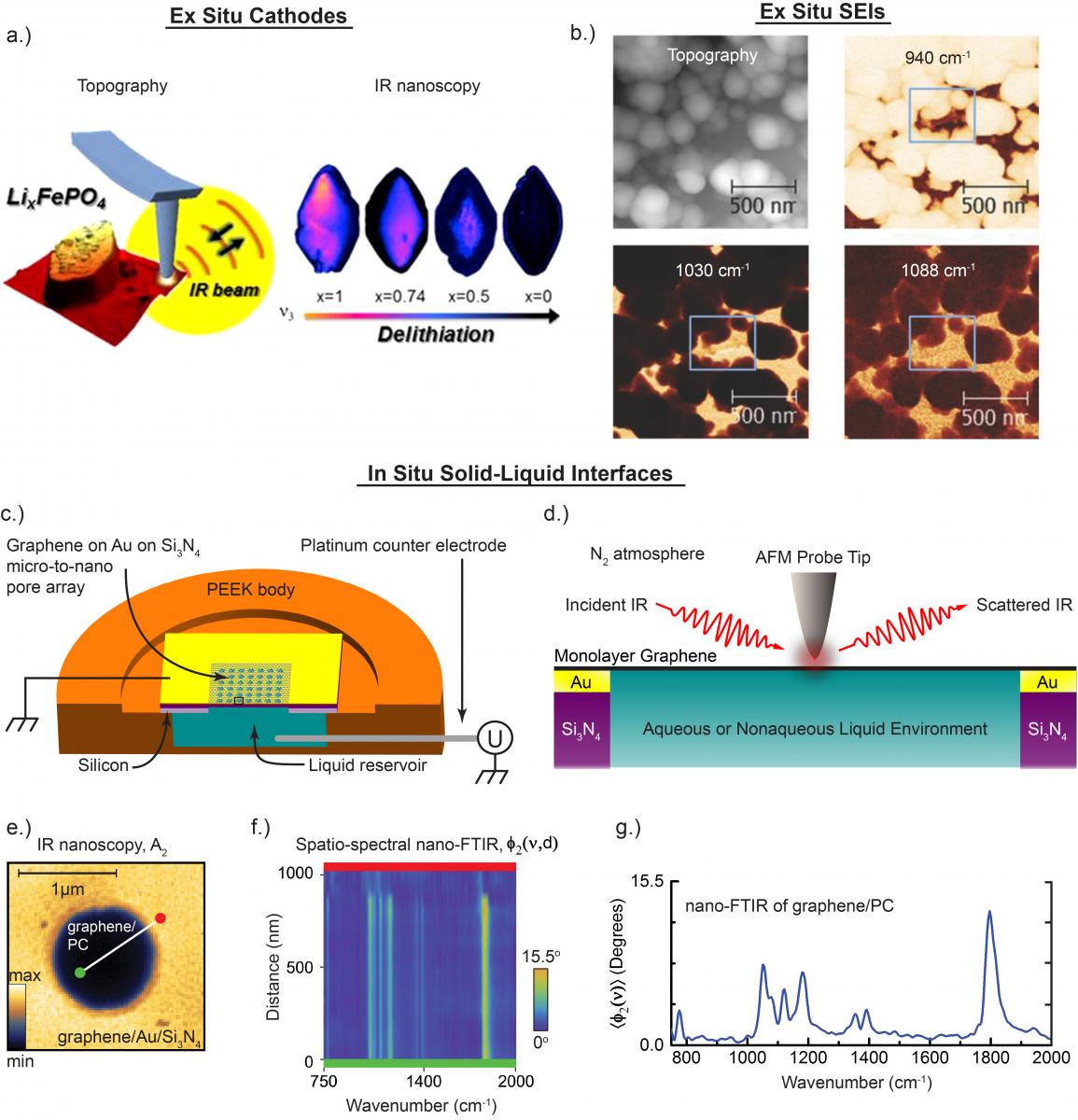 Fourier-transform infrared (FTIR) spectroscopy is a common non-destructive method for chemical analysis. It detects chemical bonds that absorb specific IR wavelengths, and is normally limited to micrometer resolution due to the diffraction limit for IR wavelengths. Recently, near-field IR techniques which can collect IR light from nano-sized areas have been developed, enabling nanoscale chemical analysis, or nanoscopy.

Since 2014 (1-4) we have been pioneering efforts to study electrochemical energy storage interfaces with sSNOM-based IR nanoscopy and nano-FTIR.  We conduct sSNOM experiments utilizing a state of the art in-house Neaspec system, and perform additional experiments at LBNLs Advanced Light Source (ALS). Displayed below is a selection of our work:

Typical lithium ion battery materials lend themselves to analysis via Raman spectroscopy since the metal-oxide bonds in typical cathodes, the carbon-carbon bonds in typical anodes, as well as some electrolyte solvents and salts are Raman-act 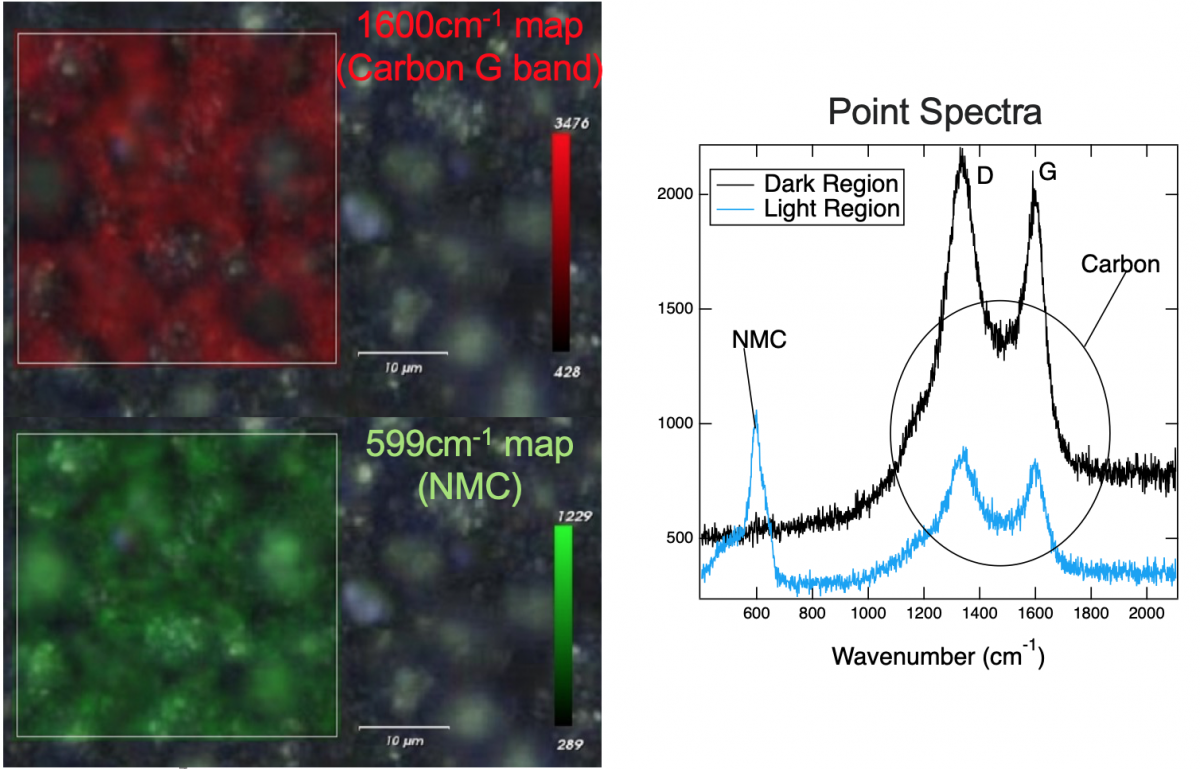 As an example, shown right, composite NMC cathodes yield Raman signals from both the NMC and the conductive carbon additive. Raman maps overlaid on microscope images show that the signal from both materials is nonuniform, indicating a nonuniform carbon coating of the active material. Analysis of the NMC peak can be used to monitor state of charge. We examine spectral and spatial variations for different charging conditions to detect different degradation effects such as inhomogeneous state of charge or loss of conductive carbon.

We also use Raman mapping to study degradation in graphitic LIB anodes. Maps of the ID/IG ratio, which is a signature for defects in graphite, for (a) a pristine composite graphite anode, and (b) of one cycled for 200 cycles between 1.00 and 0.18 V vs Li/Li+, are shown below. The 200 cycles to only 0.18 V significantly degrade the graphite in certain locations, suggesting that the onset of lithiation might be particularly problematic.

The stability of an electrode-electrolyte interface is essential for long cycle life in LIBs. However, the mechanical integrity of the surface passivation layer, generally known as solid electrolyte interphase (SEI), is often compromised by the substantial volume change 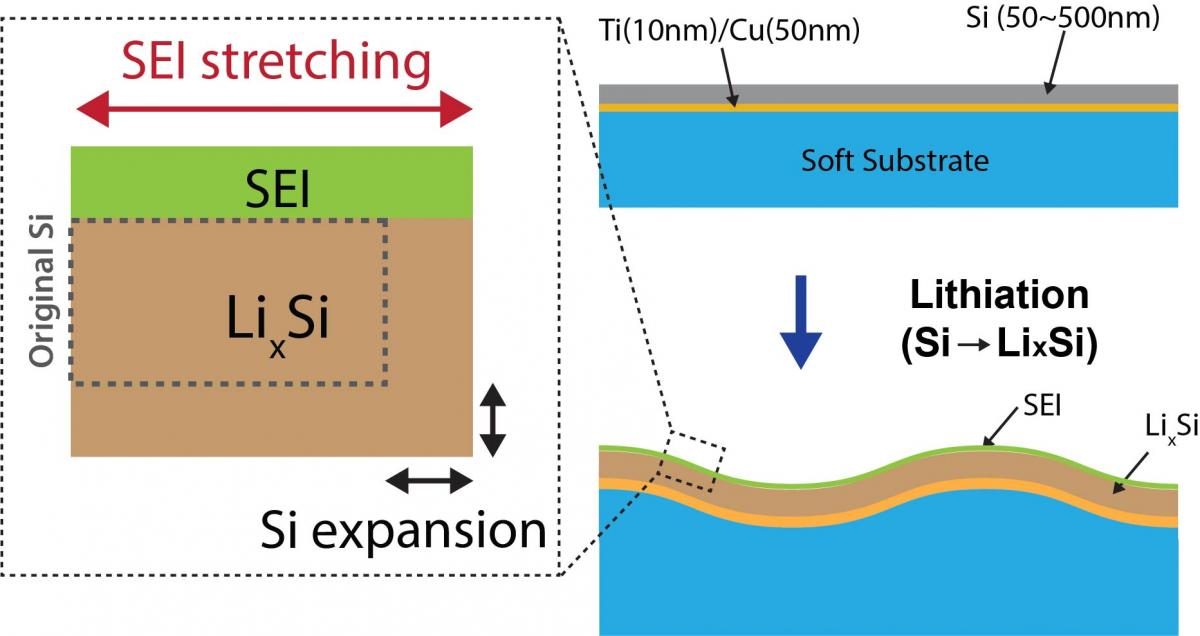 of advanced anode materials. In our group, we are developing an operando interfacial topography & strain mapping setup to correlate the volume change-induced interfacial instability with the electrochemical cycling performance of the electrode.

Shown below are first results obtained using a Si thin-film electrode on a soft substrate. During charge/discharge the Si undergoes up to ~300% volume expansion. A soft substrate allows both lateral and vertical expansion of the Si, forming sinusoidal wrinkles. The lateral expansion stretches the SEI layer; measurement of the amplitude and the wavelength of the wrinkled topography provides a quantitative measurement of SEI strain.

Traditionally, X-ray Photoelectron Spectroscopy (XPS) has made use of post-mortem analysis to characterize battery materials. However, postmortem analysis is often insufficient for battery materials because their surface, which XPS probes, changes the moment they cease to be under voltage and inside the battery. The inevitable dismounting of the cell precludes continuous operational mode, the need for rinsing and drying the electrodes removes the most volatile and soluble species, and the limited penetration depth of XPS can preclude the study of the electrode/electrolyte interfaces.

In order to overcome these shortcomings, we are developing electrochemical cells which will enable electrochemical tests while monitoring the physical and chemical processes happening at the interface by simultaneously acquiring the XPS spectra. This approach, called operando, will enable a straightforward correlation between the electrochemical signal and the physical and chemical phenomena happening in the electrodes and at the electrode/electrolyte interfaces. Coupling of operando XPS with near-ambient pressure spectrometers and soft/tender X-ray sources will enable studies of both solid and liquid electrolytes, and anode and cathode materials under realistic operating conditions at enhanced probing depths.